Construction of the Great Northern Railway (GNR) began during the winter of 1905 and finished in 1906, covering the 69.5 miles (110 kms) from St. John's (Devil's Lake), North Dakota to Brandon, Manitoba. It was founded by James J. Hill who was born in Ontario. Originally his plan was to build a track all the way to Hudson Bay, but nothing was ever pursued past Brandon. 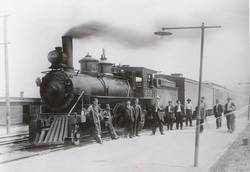 Construction of the track bed began in winter. Teams of horses or mules – approximately 12 teams per mile – were used to pull slush scrapers along where the track would be laid. Men operating each team were paid 50 cents per hour for a nine-hour workday and were also expected to supply their own board and feed their team. Though other railroad companies in the area received grants from the federal government to help with construction, the Great Northern got nothing, planning to service the area without the government's financial involvement.

The Trains Roll Down That Railroad Track

The first trip from St. John's up the line involved the transportation of coal to Brandon. The first train arrived on December 1st, 1906, though only after being stuck in snow cuts for two weeks. The first passenger train operated on April 24th, 1907, and the line soon became the chief mode of north/south transportation for people, mail and goods to and from Brandon. Oil was hauled using the rail line, and a lot of grain—especially from McCabe elevators, as James Hill was a friend of the owner. The circus train also came over the line on its way to the Brandon Fair, and stories are told of the train chugging past with giraffe necks poking out the sides of cars.

A train ran once in either direction daily except for Sundays. The roadbed was of very poor quality and in wet weather – particularly in spring – the track would become too soft to be used and service would halt for a month or two. The village of Bannerman, Manitoba, was the first stop along the line on the Canadian side of the border, and this was the location of the customs office for crossing into Canada.

The train operator along the GNR line for over 30 years was a man named Charlie Bryant, who was so well known that the rail line got the nickname “Charlie's Train.” A very pleasant and affable man, he was a farmer in his spare time near St. John's, ND, but was never too busy to help out his fellow farmers or extend an extra courtesy to passengers. Charlie had no problem stopping the train between stations to accommodate harvest workers, pick up or drop off passengers close to their homes, or pick up goods.

The depression in the 1930s brought a reduction in freight and passenger business. The switch from using trains to driving automobiles for transportation began, and in 1936 the Great Northern's mail contract ended. It was not renewed. After this, train service along the GN line ended altogether, and in 1937 the track was torn up.

Bill Kentner has researched this rail line extensively and houses a one-room museum dedicated to the Great Northern Railway at his farm northeast of Boissevain. He welcomes phone-ahead tours by donation.

Mandan Trail
The Mandan Trail was a primary artery of travel and trade between the Assiniboine River Forts and the Missouri River where the Mandan First Nations lived.