(1888-1929) The All Saints Church was established by a group of Church of England settlers. It served the area for over 30 years. 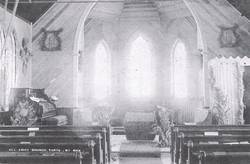 Along Hwy 3 southwest of Boissevain there sits a small cemetery on the edge of a beautiful ravine. It is nestled between the landmarks of Whitewater Lake to the north and Turtle Mountain to the south. The sign facing the road identifying the spot as the site of the All Saint’s Church is weathered and peeling – but there was a time when the sign was put there with love to commemorate what used to be a community hotspot.

The All Saint’s Church was built by Church of England settlers who came together to plan a church to serve the surrounding region. Anglican services had been held in the area as early as 1880, with Henry Drummond conducting. He conducted meetings and services in Waubeesh (a pre-railway community a few kilometres southeast of Whitewater), in the home of John A Brondgeest. Until more suitable accommodation could be obtained, services were held in the dining room of the Ryan House in Boissevain and later in the Masonic Hall. The construction of the All Saint’s Church gave the people of the area a secure place to gather and worship.

Three ladies in the Waubeesh area – Mrs Sankey and her daughters Mrs Maud Blankenbaugh and Mrs Ethel Thompson – were instrumental in the creation of the All Saint’s Church parish. Ethel Thompson and her husband Frank donated the land that the church was to sit on. Much of the finances it took to build the church were donated by relatives of the parishioners living in England who wanted to contribute. With these funds the small church was erected in the spring of 1888 and furnished with pews, alter and linen, collection plates, a lectern, organ, etc. The church was consecrated on May 26 1888 and formally opened by Archbishop Machray.

There was room for a small cemetery beside the church. The first body recorded buried there was that of Richard Henry, infant son of Frederick and Maud Blankenbaugh. His was followed by at least seven other graves, though only 6 gravestones exist at the site today.

The All Saint’s Church and Cemetery served as a landmark and community centre for over 30 years before the numbers in the parish could no longer support it. The older members of the congregation “moved on to fairer pastures,” and some settlers moved away from the region. In 1929 the church closed its doors. Several years after it closed, the church building was moved to the Horton district where it became a home for the Mannix family. A sturdy fence was built to surround the old churchyard and cemetery and the Wassewa Ladies Group erected the sign on the spot.

Today the site is made up of a few graves and caragana bushes.

Bluevale School #2
(1901-1967) In 1948 Bluevale School moved from previous location to present location.
Boiler Trail
(1880 – 1885) The Boiler Trail provided a detour around the muddiest section of the Boundary Commission Trail.
Mandan Trail
The Mandan Trail was a primary artery of travel and trade between the Assiniboine River Forts and the Missouri River where the Mandan First Nations lived.