(Late 1700s) The log foundations of a fur trading post were discovered at this site in 1937. This was one of two posts that were located on the south side of the Souris River as opposed to the north.

The Souris Basin was very important in the fur trade of the 18th and 19th Centuries. The forts in this area had access to the surrounding plains which the bison favoured as grazing grounds. This made the Souris Basin forts key to the production and supply of pemmican, which supported the rest of the fur trade. A total of 18 posts – belonging to companies and independents alike – grew and faded from the Souris River between present-day Souris, Manitoba and Minot, North Dakota.

In 1670 the Hudson's Bay Company (HBC) was founded and given control over 1.5 million square miles of territory, then known as Rupert's Land. At first they traded only from Hudson Bay letting the trade come to them, but soon French traders upset the HBC's monopoly by establishing forts in the south and strategically cutting off the company's trade routes. This forced the HBC to move some of its activities into the interior in order to compete. In 1766 the company made its first trip down the Souris River en route to Missouri River country to trade with various First Nations (such as the Mandans. After this the company continued to trap and trade along the Souris River.

The North West Company (NWCo) was formed out of Montreal in 1779 and over the next 40 years competed viciously with the HBC for trade in the west. Though both companies had access to a vast expanse of territory, rival posts were often built directly beside or across a river from one another in order for one to be able to keep a close eye on the operations of the other. The first Souris River post, Ash House, was established by the NWCo in 1795. 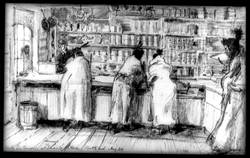 Customers look over the goods at a fur trading post. CREDIT: Culture, Heritage, Tourism and Sport

Following the American revolution in 1776, Americans began trapping and trading in Canada. This activity continued until the 1870s when the border was surveyed, long after international trapping was made illegal in 1820. Two American forts existed on the Souris River during the early 1800s.

The Use of Liquor

Fur traders found that liquor was an effective trading commodity and used thousands of gallons of rum and wine to grease the wheels of trade with First Nations. The volume of liquor was increased by mixing it with chewing tobacco, red pepper, red ink and water which formed the concoction known as firewater. The unrestricted use of alcohol as a trading commodity continued until 1874 when the North West Mounted Police began enforcing the laws.

Besides the introduction of alcohol, the fur trade in southwestern Manitoba had another effect on First Nations already occupying the land. The Assiniboine participated cooperatively in trade. Their reward: 90% decimation of their population over about 50 years mainly due to smallpox, a disease brought to America by Europeans. The Dakota were hostile towards all traders – European and Native alike – and made a concerted effort to stop all traders from entering Souris-Missouri country.

From Fur Trade to Settlement

By the 1860s there were almost no buffalo left in the area, which caused most of the Souris River posts to close down and disappear. In 1857 the government sent out an expedition led by Henry Youle Hind to gauge the agricultural potential of the plains. Hind's report reflected positively on the land, which led to the HBC's sale of 95% of Rupert's Land to the Dominion Government of Canada in 1869. In the six short years between 1875 and 1880, 174 Townships (over 16,000 square kms) of southern Manitoba were surveyed, and land that had been a hunter's paradise for centuries was suddenly made ready for settlement. In this way a huge chapter of Manitoba's past was brought to a close.

O'Meara, Walter. Daughters of the Country: The Women of the Fur Trade and Mountain Men. New York: Harcourt, Brace and World Inc, 1968.

Magwood Site – Independent Trading Post
The remains of a very old independent trading post were found here in the 1940s. It is unknown when exactly it operated.
Yellow Quill Trail
(Pre 1790 - 1886) The Yellow Quill Trail began as a trade route used by First Nations but served as a convenient avenue of travel for pioneering Europeans as well.