Sourisford pioneer Walter F. Thomas came to the area in 1879 and settled in for life. He ended up serving as Secretary Treasurer of the new R.M. of Arthur for thirty years, and at the end of it all, he could look back on a few close calls. 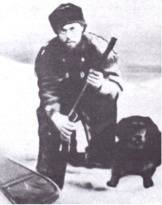 It was in late March 1880. A spell of warm weather had melted much of the snow, when Walter set out for Winnipeg to get more provisions.

There was no railway through the region and no roads. Only rough trails connected the scattered settlements.

So of course Walter knew that it was a long trip. He was familiar with the pitfalls and perils of travel in this wide open land. It was sparsely settled, you were really on your own. The low lying areas could be nearly impassible in the spring, bridges were not yet built over creeks, and of course, the weather could let you down in a big way.

Walter knew all this, but he could never have predicted the ways in which circumstance and weather could conspire against a traveller.

On his third day he was caught in a snowstorm. After fighting against it for many a mile he arrived at Plum Creek near where Souris sits today. He found a few thin poles and built a rough shelter using his blankets, crept in and slept the night. He awoke stricken with snow blindness, and was confined to this makeshift shelter for three days. The delay was something one could expect, but while he was incapacitated his dog ate most of his provisions.

Undaunted, when his sight improved he set out again and was able to make his way to the Brandon Hills, where he could find the next available shelter. The bad weather persisted and he spent a cold hungry night, afraid to sleep, walking and jumping around to keep warm.

The next morning he set out towards Grand Valley, just east of where Brandon would soon be located. ) Soon the snow was so deep his pony could go no further, and he was forced to retrace his steps to Plum Creek where despite the heavy snowfall he located his previous camp.

It is hard for us to imagine today how bare the prairies were in those days. The shelter provided by the scant groves of trees found only along stream beds and in the few hilly areas, were the only places one could get firewood. And that could be a matter of life and death on a winter journey.

So Walter gathered some branches, lit a fire and before settling down for a well-earned sleep he hung his mitts and socks up on poles to dry. During the night the dog, feeling cold, crawled up to the fire, and knocked them into it.

So there he was, out of food, without proper clothing, and still far from home. It was evident that both he and the dog would starve, so very reluctantly he killed his faithful friend, wrapped the flesh up in separate packages, and took one for each meal.

The next day he made the sandhills near Lauder where the snow was almost gone and the sun shone. While he was riding along, a skunk ran along the trail in front of him. Almost without thinking he threw his hand axe at it and, with an admittedly lucky shot, struck it on the head, killing it instantly, and before it had time to deploy its self-defense mechanisms!

And so he made it home without further mishap, fed by this unorthodox diet, and unimpeded by further misfortune.

A lesser man might have chosen the opportunity to return to a more “civilized” place, and follow a more secure lifestyle, but this was just the beginning for Walter. He wasn’t a quitter. After a while, it was just another story to tell.