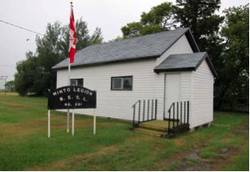 Alcester was originally a community of homesteads located in south-west Manitoba. However, in 1906, due to a new railway from North Dakota stretching to Brandon, it was given a more prominent role in the form of a railway station and grain collecting centre. Unfortunately, due to heavy economic reliance of the grain trade, Alcester had a short history. By the late 1920s, freight and passenger income declined , there was a drought on the prairies, and in 1929 the stock market collapsed. The Depression meant that the railway was losing money and in 1936 the company closed the line and dismantled the stations. This proved to be the end and unfortunate fate of many of the new towns during this time, including Alcester.

Alcester School No. 380 – The Alcester School District was organized formally in February 1887 and a school building operated at SE18-5-19W and NE15-5-19W. After the school closed in 1954, its building was moved to the village of Minto, where it was used as the local Legion Hall.