American Forts on the Souris River

Today we regard the international boundary between Canada and the United States as a static, non-negotiable part of the landscape. This attitude towards the border is a relatively recent one, developed over the past 140 years. Before the 1870s the border was not a solid obstacle, especially not to the fur trappers and traders who made a living off the land. 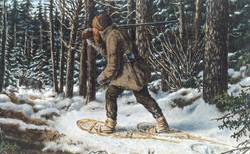 The uncertainty of where the international border was located offered an opportunity for Canadian and American fur traders to exploit fur resources on either side of the border. The Hudson’s Bay Company (HBC) at that time had a near monopoly over the fur trade in North America and often operated within the boundaries of the United States. The rising American Fur Company returned the favour and went so far as to claim that the entire Souris River was south of the 49th parallel and thus within the United States.

In 1821 the HBC and North West Company concluded their rivalry by amalgamating. After this, competition for furs along the Souris River and the border was between the HBC and the American Fur Company, along with many independents, both Canadian and American.

American Fort on the Souris River

One particular site along the Souris River is thought to have been the location of a fur post built and operated by the American Fur Company, one of at least two known American sites on the Canadian section of the Souris River. Its location on the north bank of the river directly north of Lauder (west of Hartney) was mentioned in 1934 by a local Métis elder. The year 1810 is a good estimate for when it was constructed as the clay chinking in the chimney dates to after Ash House (constructed by the NWCo in 1795) but before Joseph Desjarlais built his large and successful independent fort in 1836 just upriver from this site. The American Fort seems to have been operational for a good stretch of time, though less than 20 years.

A portion of the fort has been eroded by the Souris River, but from what remains, the size of the fort is estimated to have been 100 feet by 120. The remains of cellar holes and chimney mounds indicate that three buildings were enclosed by an outer stockade.

There was at least one other American Fort that operated along the Souris River in what is now Manitoba. The exact location of this site is unknown, though it is believed to be south of Melita.

The American Fort's closing around 1828 was most likely due to Cuthbert Grant's appearance on the Souris River. Grant appeared with the authoritative title “Warden of the Plains” and instructions from the HBC to rid the Souris River of independent and American fur traders. A charcoal line ten inches deep in the river bank provides evidence that the fort burned down in the end. Old timers of the district report that the building remained standing for a time after it was no longer in use. It is likely that the fort was the victim of a prairie fire or burned down by Dakota opposed to the fur trade.

After being booted out of Canada by Grant, the American Fur Company retreated to their side of the border where they enjoyed a monopoly until ceasing to operate in the 1840s. Astor sold the company in 1834 to retire from the fur trade. He died in 1848.