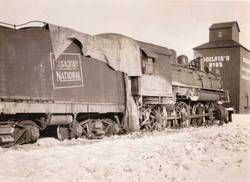 Argue is in the Municipality of Grassland. Grassland was formed by the amalgamation of Cameron, Hartney, and Whitewater.

Argue was known as the “Trackend” for a year as it was the most westerly station on the Winnipeg-Cameron-Hartney Branch of the Canadian National Railway until 1900 when the line continued to Hartney and Virden.

The community was named after John Argue, Avondale politician.

In a December, 1898, issue of "The Star," Dr. Woodhull wrote, "The Northern Pacific has stopped building its road at the comer of 1-6-23. It is still possible to have it come to Hartney, if we are willing to rustle for it, get to work in a business-like way, quit our child's play and do something reasonable to get the road." Meanwhile, the end of the road became known as "Trackend" and an elevator was built there. The name of this siding was later changed to "Argue." The elevator is now privately owned by the Somerville brothers.