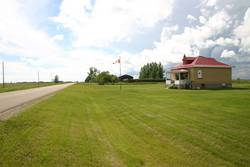 Where the name originated or how it was chosen no one seems to know, but when the railway came through in November 1909 the station was built. The sign read "Bede Siding" In 1883 when the first homesteaders came into the district, they could see for miles the land was so flat; very little bush but plenty of prairie grass and wild flowers. They were very happy to find that fresh water was easy to come by just by digging 10 or 15 feet into the ground. The first homesteaders to arrive from Bruce County, Ontario came along the old prairie trail from Pipestone about ten miles until they came to Gopher Creek which was a small creek that only ran in the spring. It started up west of Tilston and ended in Maple Lake. The school closed in 1965, since then the C.P.R. have taken up the tracks and the elevator was taken down so not much is left of the siding. Those who were brought up or lived in the district of Bede were all of the same opinion, "It was a good place to have lived in, good friends, good neighbours, What more could we ask for?”

Bede School – Bede School opened in 1913 and operated until June 1966. The remaining students of Bede were reassigned to Melita School. Although the building stood vacant until 2011, it has since been repaired and is now being used to sell local crafts.

Reflections of Time: A History of the R. M. of Albert. Tilston: The Municipality, 1984. Photo by Ken Storie