Beginning of the Metigoshe Community

The Métis community on Turtle Mountain is somewhat unique. Its presence raises the question: How did this group of Métis come to settle here? The Métis differ from the average European settler in that they did not immigrate to the Canadian prairies. They were born here. 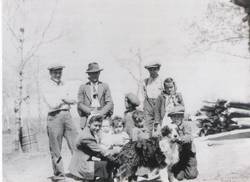 Some members of the Metis Metigoshe Community.

Red River was the first place that the Métis settled in number. In fact for several generations they made up the majority of the settlement’s population. The Red River Resistance in 1869 and the following North West Resistance of 1885 uprooted Métis families from their homesteads and scattered them in all directions.

A Relationship with Turtle Mountain

The Métis have a long history of interaction with the landform known as Turtle Mountain. To a trapper working for the Hudson’s Bay or North West Company, Turtle Mountain and Whitewater Lake to the north were prime hunting grounds. Turtle Mountain was also important to the Métis as a part of their [bison hunting](article=metis-bison-hunt] activities. During the summer and fall hunting seasons the Métis grew familiar with the plains surrounding Turtle Mountain; the region was favoured by bison due to its rich grazing. As the decades of the 19th century progressed, the bison withdrew farther west due to increased human activity on the plains. Soon the Métis were travelling for weeks before encountering a herd. To cut down on travel, Métis began establishing winter camps on Turtle Mountain (and other such sheltered areas). From these impermanent camps they hunted the bison on the surrounding plains, harvesting the animals’ meat as well as their thick winter coats instead of pursuing them during their long migrations in the summer. Turtle Mountain provided resources from which the perfect winter camp could be built: construction materials for simple cabins, firewood, and shelter from the stiff winter winds.

Yet despite their frequent visits to Turtle Mountain the Metis did not permanently settle there until the early 1900s. Settlement in the area had boomed 25 years earlier, and most of the available homesteads had long been settled – though there were many sections of land that were owned by the HBC or Southwest Colonization Railway and not available for sale. By 1908, when the first Métis individuals moved into the area, there were enough European settlers in the area for a school to open, Marsden School 1.

By 1908, only several quarter sections of land were available to be settled. They were located close to the international boundary and undesirable because much of their area was covered by lakes and bushland. These quarter sections had been left until last due to their unsuitability to agriculture. It was this bushland, however, which held attraction for the Métis – a people who had a long history as woodsmen and trappers. The lakes that covered the sections were seen as a benefit, because they would attract game and trappable animals.

The first four Métis settlers to take advantage of the bushland on Turtle Mountain were Louis Lee Racine, cousins Elzear (Zero) McLeod and Peter McLeod, and Billy Gosselin. All four were descended from the Red River Métis, though the latter three had been born at St Francois Xavier. Métis families from St Francois Xavier had been pushed in different directions as European settlement in Manitoba increased and some found a temporary home in Belcourt, North Dakota. It was from there that Billy, Peter and Zero chose to move north over the border. The McLeod men had families that moved with them; Billy was the only single man among the early Métis settlers.

The original motives of these first families for moving to Turtle Mountain are not exactly known. Perhaps they already held Canadian citizenships and moved to Turtle Mountain as the closest place in Canada that was attractive to them. They certainly did not move far into Canada when they came in 1908; they settled on the bush- and lake-covered sections of land that were not even a mile north of the border. They claimed homesteads on section 3-1-22, which was bordered on one side by the Canadian-American boundary and included a section of Lake Metigoshe’s northeast shore.

Louis Lee Racine, the fourth of the area’s early Métis settlers, was born in Montreal in 1852. He lived there for only a few years before his family moved west. He met his wife, Selina Moren, in Beauford, North Dakota. They married in the late 1890s and had two children, Louis Jr and Elizabeth, before moving to Turtle Mountain in 1908 or 1910. They claimed the southwest corner of section 10-1-22 and built a log home near the shore of Sharpe Lake (then known as Long Lake). Louis paid the taxes on their land by trapping muskrats which were worth only five cents apiece at that time. In the 1920s Selina suffered from an illness which eventually took her life. The family travelled back to Beauford to bury her at the place where she grew up, then returned to Turtle Mountain to live.

One other individual was important to the growth of the Métis community on Turtle Mountain. In about 1920 William (Willie) Goodon left his home at Sandy Lake. At this time he was about 20 years old. He left on foot with nothing but a rifle in his hands and no specific idea where he was headed. Eventually he turned up on Turtle Mountain, at the door of Louis Lee Racine’s home where he stopped to ask for a drink of water. Intending to visit for an hour, his stay stretched into a month. Figuring that Turtle Mountain was a good place to live, Willie and Louis travelled to Sandy Lake to bring back some of Willie’s family. They made the trip by horse and covered wagon, which took three days to travel on the way back. Returning to Turtle Mountain they were accompanied by Willie’s mother Madeleine and two of his sisters, Alice and Roseanna (Rosna).

When Louis Racine Sr died, his son Louis Jr took over the homestead. Alice and Louis’ descendants still live on Turtle Mountain. One of their granddaughters, Leah LaPLante, was raised on Turtle Mountain and is now head of the Southwest Region of the Manitoba Métis Federation (MMF).

After bringing his mother and sisters to Turtle Mountain, Willie Goodon lived in North Dakota for several years. There he met his wife, Florestine Vilneauve (nee Amoyette) and had three children. After 1926 they returned to Turtle Mountain to live and had four more children. Their descendants still live in the area.

From these core families – the Racines, Goodons, Gosselins and McLeods – grew the Metigoshe Community. More land around Metigoshe became available after 1913 when the HBC and Railway sections that had been reserved became available for settlement. Much of this land was taken up by Métis families who were attracted to move to Turtle Mountain because they knew they would be among friends and family. The Métis were at this time interested in banding together in order to preserve their culture and identity. Especially during the early decades of the 1900s the Métis were receiving no small amount of discrimination, and sticking together helped them preserve their sense of pride.

European settlers in the area became part of the Metigoshe Community as young people married Métis partners. Outside the ties of matrimony, dependable neighbours created secure ties with the Métis who accepted them as part of their community and social network.

The Turtle Mountain Métis formed two locals of the Manitoba Métis Federation: The Turtle Mountain Local and the Cherry Creek Local. These are self-sustaining, non-profit organisations that hold various cultural activities in the area.