William (Billy) Gosselin, a descendant of the Red River Métis, moved from North Dakota to homestead in Manitoba. He settled not a mile from the Canada-US border, on the west side of Turtle Mountain. Billy, along with neighbours Elzear (Zero) McLeod and Louis Racine Sr were the beginning of the Metigoshe Métis Community. In 1928 Billy married Rosanna (Rosna) Goodon. By the mid-1930s they couldn't pay the taxes on their land and ended up without a place to live. A nearby lake, Dromore, had a small peninsula that was unoccupied, so Billy went ahead and built a house on the public road allowance. He raised four children there and made a living from hunting, trapping and helping out his neighbours who would return the favour when it was needed. 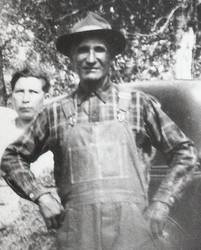 At the time, Billy was the only Métis person in the area to play the fiddle, and his music was in great demand at parties. Nearly every Saturday evening, neighbours would gather at his house and dance until dawn. The kitchen stove had to be removed from the house, and furniture was thrown out the door on these evenings to make room for the dancers.

Billy's house became quite a community meeting place over the years. In the summertime, people would gather there for picnics and visiting. Because the property was right on the lakeshore, it was an ideal spot for an outing as children played in the water and along the sandy shore while their parents drank tea and visited. On Sundays, mothers would take their children to the spot to bathe in the lake while they did their laundry. In the winter, it was popular to strap skates to the bottom of shoes and have skating parties. The place was known as Billy's Point. It became an important social venue for the people of the area, particularly the Métis. Many present-day elders of the community met and courted their life partners at these gatherings, and Billy's Point is very special to them. 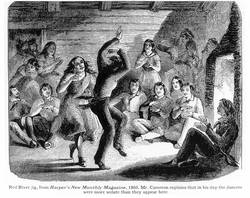 In 1953 Billy Gosselin died, and seven years later his wife Rosanna also died. Their children moved away and the house at Billy's Point became vacant. A few different families lived in the house for a few years at a time and other Métis in the area continued to enjoy the location as a meeting place.

Today's Métis would like to see the location designated as a heritage site for all people to enjoy as a park, perhaps with the addition of a playground, camping area, and interpretive centre to commemorate the pioneers of this area: of all cultures.

Rise of the Metis Identity

Beginning of the Metigoshe Metis Community