In an era where herds of bison are but a memory, the bison rubbing stones remind us of a time well passed . . .

To a bison grazing the plains hundreds or thousands of years ago, a lone stone on the prairie was the forerunning technology in back scratchers. Bison rubbed against the stone to rid themselves of their heavy winter coats or to satisfy the itch of bug bites in the summer. Due to repetitive use—over many generations and many millions of bison—the boulder became polished and smooth. The ground around the boulder was loosened by the weight of many hooves and blew away in the wind, forming a depression around the stone. 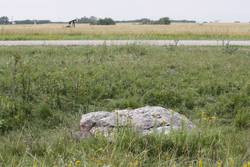 This bison rubbing stone near Pierson, MB has sunk into a considerable wallow.

So how did these great big rocks end up in the middle of the prairie? Bison rubbing stones are what geologists call “erratics.” Erratic stones are defined as rocks that are different compositionally from the rocks that form the surface on which they are found. Erratics were moved from their original homes by the formation of the glaciers thousands of years ago. As the ice formed, it ripped chunks of stone and gravel from the earth and carried them across the landscape. Several thousand years later, the glaciers started melting. When the glacier was no longer able to carry the weight of the boulder, it was simply dropped. They were left scattered over the landscape, some the size of fieldstones, some car-sized and others as big as a house.

As the climate in North America warmed, plants and animals began again to thrive. Mammoth, antelope, and long-horned bison grazed the prairie and were hunted by saber-toothed cats and the short-nosed bear. Changing conditions on the continent caused many of these ancient animal species to die out. The bison survived, adapting and evolving into faster, smaller herd animals. They moved en masse across the landscape and were pursued now by human hunters.

Many erratic boulders and bison rubbing stones became landmarks for early peoples and places of ceremony. There are more than a few existing rubbing stones on the prairies today, though there were many more two hundred years ago. Many have been disturbed or removed by the relatively recent activities of road building and agriculture. Most rubbing stones that are left are located in unploughed pastures of native grassland.

Rubbing stones are a tangible reminder of the bison; an animal who once reigned supreme on the prairies. These boulders are also a reminder of how the landscape has been sculpted by human activities. When bison relieved their discomforts on such stones they were surrounded by nothing but open prairie. Today the stones sit in cattle pastures, where they are no doubt used in the same way as by the ancient bison. The difference is that today they sit within fences, beside roadways and beneath power lines.