The pioneers have plenty of “Blizzard” stories. This one from the Melita History is told by Marion Robinson. (Miss Reid, to her students at West Brenda School, back in 1918.)

Although she boarded with the Charles Smith family, she had spent a March weekend in Melita as she often did. In those days ten kilometres was much too far to commute daily.

We’ll let her tell us what happened.

When I arrived that morning, a light misty rain was falling, and the wind was rising. I had a strange feeling of foreboding when I could not see any of the children. However, when I entered the school I found Harry and Jack VanKleek, and Cora Moore. Around 11 o'clock I was amazed to find, on looking out the window, that I couldn't see even the pump, which was quite close to the school.

My mother had wanted me to take lunch from home, but I told her my pupil, Viola Smith, would bring it as I stayed with Mr. and Mrs. Charles Smith; but that was the one day in two and a half years that Viola didn't come to school. At noon the children offered to share their lunches with me, but I didn't like the look of the storm, and only accepted part of a sandwich. 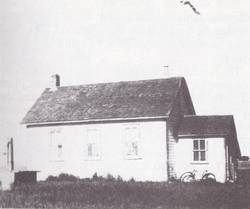 Miss Ried was a teacher at West Brenda School, located just west of Napinka. It opened in 1882 and was one of the first schools in the region.

The storm got worse and worse as the day wore on. At four o ' clock, Harry and I went to the door and opened it. The snow hit us with such force we were gasping and I could not see my hand, which I held out the door. It took the two of us to force the door shut, and I told Harry that no one would be leaving the school. We carried in coal, which was in a little shed opening into the porch, and piled it around the stove. We sat around and talked, and I tried to keep their thoughts off the storm. At supper time, the children ate what they had left of their lunches - still offering to share with me, but I knew they hadn't much left. I told them I wasn't hungry, and I really was too worried to be hungry. After it got dark, and we had no light, and no water, I told the children to try to find a comfortable position at their desks and try to sleep.

It was a terrifying night. There was a long string of shaky stove pipes almost the length of the room, and with each terrific impact of the wind they shuddered and groaned. I wondered how we could ever find the low flat-roofed barn surrounded by high snowdrifts, if the pipes fell and the school took fire. The dark noisy night slowly spent itself, and day dawned to shrieking wind. As soon as the light was good enough around 8:30 a. m., I started the children to work to keep their minds off their hunger and loneliness.

I was standing by the window when I saw a horse's head brush by, and I will never forget how the terrible load of worry lifted from my shoulders. I hadn't realized how dreadfully lonely I was, and how frightened I had been for the children.

Mr. VanKleek took the team to the barn, and Mr. Moore, looking like a snowman with ice-coated face, opened the door. In a scared voice he said, "Is everyone here"? I was thankful to be able to answer, "Yes."

They made their way to the school by keeping the wind in their backs, but didn't know where they were till they ran into the trees across the road from the school. They brought us food, and tea to drink, and stayed till Mr. Smith came for me at 2:30 p. m. He had to dig his barn out of the snow to get the horses out.

The school was closed for a week, but to this day on a soft March morning with a fine snow falling, the old fear for the school children comes back to haunt me.