The 110 year old building that today houses the Hart-Cam Museum spent most of its life serving as a general store. It later became a restaurant, museum . . . and Hollywood film set? Yes indeed – not only once, but twice! 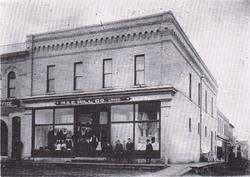 W. H. B. (Harry) and Alfred Hill, hailing originally from England, arrived in Manitoba together in 1881. Both of them became successful businessmen—opening general stores across southwestern Manitoba—and were generous contributors to their communities.

The A.E. Hill Company Ltd took its name from the younger of the brothers, Alfred Edward Hill (b. 1859). After arriving in Manitoba, Alfred worked as an employee in the retail trade before purchasing his own store in Griswold, MB in 1891. While there, he served as the Reeve of the RM of Sifton. In 1899 the Hill brothers built a two-storey general store in Underhill east of Hartney, which had just been reached by the railway. Harry supervised this outlet of the A.E Hill Co. It was eventually sold in 1938. Harry and Alfred also bought a store in Carmen and gave it over to their younger brother Fred to manage.

The Hill brothers began doing business in Hartney when they bought and operated an existing general store purchased from H. C. Hamelin. It was known as the Red Star Store and Harry was set up as manager while Alfred remained in Griswold.

The A. E. Hill Store

In 1902 the Hill brothers built their own store on the corner of Poplar and East Railway streets in downtown Hartney. The two-storey stone and brick general store that still stands on the spot is now home to the Hart-Cam Museum. Harry was manager of this business as well.

The building’s foundation required four car loads of stone which were brought in on the C.P.R. The interior of the building was beautifully finished with hardwood floors and oak shelving, counters and tables. The ground floor was home to dry goods, boots and hoes, groceries, ladies goods and the fancy department. On the upper floor could be found carpets, linoleums and the millinery and dressmaking departments. Each season a milliner and assistant came from Toronto and made hats for the spring and fall. A head dressmaker was employed, also from the east, and local girls were hired to work as apprentices. A lift was built so that the second floor could be easily accessible.

The goods in the store were generally imported from Europe or eastern Canadian wholesale houses. Business was conducted on a credit basis, meaning that some accounts carried over from one harvest to another. Especially in years of crop failure and depression, this system put strain on the store’s accounts as many farmers were forced to default on their debts. 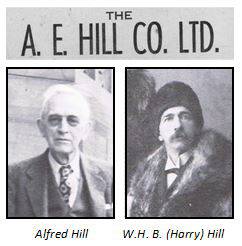 Harry Hill lived in Hartney while he managed the A. E. Hill Company general store. He was very interested in the growth and development of his community: he sat on both the RM of Cameron and Town of Hartney councils before serving two stints as mayor – from 1907 to 1909 and again from 1918 to1928. Furthermore, he sat on over half a dozen sports and social organisation committees. He was married to Irene Hooper of New Orleans for 42 years and they had three daughters.

Alfred sold his business in Griswold in 1912. He moved to Brandon where he managed some farmland, experimenting with new seed and crop varieties, and continued his interest in politics. In 1930 he moved to Hartney for the first time and lived on the second floor of the general store. Alfred was also a dedicated community man. He was a member of the Red Cross and helped with Boy Scout outings during the depression. He was very interested in the education of upcoming generations and gave yearly prizes at the Hartney School.

After the death of his brother Harry in 1940, Alfred took a more active role in the affairs related to the general store. Harry’s youngest daughter, Irene, moved home from Ontario to help her uncle run the business, taking up her father’s share in the A. E. Hill Company.

When Alfred Hill died in 1953 (at 94 years of age), Irene continued the business on her own for nearly 30 more years. In 1982 she held an auction and sold the assets of the business. This brought an end to the 86-year long operation of the A. E. Hill Company in Hartney.

The building moved into a new chapter when Kim and Garry McBrien bought the building in 1995 and operated a restaurant known as the Hillstreet Market for three years. They modernised the building with new plumbing and hydro, in addition to laying a boardwalk of planks on the inside of the building. The wood used for this job was recycled from a building that had been built in 1885, making the renovation materials older than the building itself!

The Museum Takes Over - and Hollywood Visits!

When the McBriens decided to close the Hillstreet Market, the board members of the Hart-Cam Museum approached the owners with an offer to purchase the building. Months of hard work were put into moving display cabinets and hundreds of artifacts into the new space. Even more hours were then spent redesigning the displays. Finally the space was ready and a grand opening was held in October of 1999.

In the summer and fall of 2005 the museum – and indeed the entire town – was treated to the excitement of a visit from Hollywood. For two weeks in April, Spyglass Entertainment and Manitoba Film and Sound moved into the small community to shoot a thriller heist film, The Lookout. The film starred Jeff Daniels and Joseph Gorden-Levitt, and the town of Hartney posed as the fictional town of Noel, Kansas. For the film, the museum building was emptied of its collection and made to look like a bank inside and out. A great deal of filming happened in the “bank,” mostly at night. One of the climactic ending scenes required a hole to be made in the interior wall that was meant to be the bank vault – this is how the robbers in the end made out with the money. Today a small explanatory sign describes why there is a hole in the middle of a museum wall.

Five months later, film crews returned to Hartney for five days to film scenes for the Stone Angel, produced by a Manitoba-based company Buffalo Gal Pictures. The museum this time returned to its roots to play the role of a general store.

Today the museum is known for its unique displays. There is also a small archival collection of family histories and other local history. In 2000 the museum acquired a computer and scanner, helping greatly the effort to catalogue artifacts. In 2012 the second floor of the building was filled with additional display scenes and opened to the public.