A Tale of Two Mill Fires

The explosion and fire at the Grist Mill in Boissevain in 1925 destroyed a thriving operation, and signaled the end of an era. Despite the fact that it had employed twenty people, and had a steady business filling orders from local customers as well as shipping product some distance, the future prospects for the milling industry in western Manitoba didn’t justify re-building. 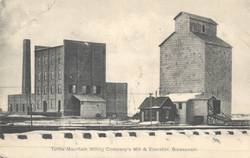 The flour milling industry had once been the most important regional manufacturing business in Manitoba, but that was changing. Improved transportation links, competition from large national companies, and changing consumer habits, were taking their toll on local businesses in general. Small-town mills were one of the casualties. The closure was a serious blow to the local economy and many of the former employees had to leave town to find suitable employment.

The fire itself was not unusual. Mills were prone to fires because the grain dust was highly explosive. There had already been one close call when an explosion ripped out part of a wall in 1920.

A Town Needs A Mill

The story of milling in Boissevain begins shortly after the town was established as an important commercial centre on the new CPR line. In those days a progressive town needed a mill. In fact, smaller communities would often offer a “Mill Bonus” of several thousand dollars as an incentive to get one started.

In 1889 Preston and McKay built a substantial structure of local sandstone on the west side of Mill Road just south of the CPR. track. It housed the latest in mill technology; steel rollers rather than the large millstones, and a steam engine, which replaced reliance on waterpower.

Through the frequent downturns of the agricultural economy, a farmer could now at least use a portion of his crop to help feed his family by converting wheat to flour. The mill kept a share of the grist and no money needed to change hands.

The mill was soon also exporting flour. In 1894 four carloads of flour were sent to Liverpool, England, and total production was 400 sacks per day. 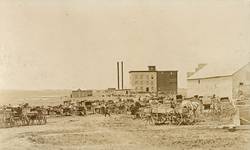 So in 1902, when the operation was consumed by fire there was no hesitation. By May of 1905 the Turtle Mountain Milling Co. Ltd., a consortium of local businessmen, had purchased the site and was beginning to erect a new building. By March of 1906, the new mill was in operation. This one had an electric generating plant, which also supplied the first electricity for a few businesses and the town’s street lights.

But changes in commerce and transportation began to take effect, and after a few years, business declined. The mill had ceased operations when the onset of World War I revived it. Flour was urgently required for the war effort and a retired miller, George Dow, soon had the mill up and running again – with its entire production of 600 bags per day being shipped overseas. This wartime use of Boissevain flour created a peacetime market and after 1918 most of the flour still went to England, Scotland, and Holland. The reprieve was short-lived however, and by the 1920’s a network of roads was creating even stronger connections to the urban centres. The second mill was still thriving when fire struck it down, but the writing was on the wall.

Miller George Dow may have anticipated today’s concern with the additives and methods employed in modern food processing. He was an early advocate for unbleached flour, believing that the bleaching process was harmful in that it removed the wheat germ oil. Although there was a strong demand for bleached flour locally, the government required that all flour for overseas should be unbleached. Several chemicals used for bleaching have now been banned by the government as dangerous to our health.