The pioneers who settled in southwestern Manitoba in the early 1880’s must have wondered from time to time about that decision. The trip here was generally a bit more trouble than they could have imagined. The promotional material they had been given routinely gave incredibly optimistic reports about the prairie climate. There was the uncertainty of the “Manitoba Boom” from 1881 – 82, followed by a depression in 1883. Floods in 1881 and 1882 were followed by early frosts and various other afflictions affecting crops. Promised rail lines were slow in coming. They endured all this.

Then in 1885 they started hearing about armed insurrection in the west. What else could go wrong?

The fighting was many miles away, involved only a very small group of people, and with the benefit of hindsight we know that any escalation of that conflict was unlikely. But the settlers in rural Manitoba didn’t know that.

So when James Henderson was awakened in the night by “a lot of yelling and drum beating”, and witnessed a “big camp of Indians in war paint,” he was sure that they were “going west to support Riel,” and he was afraid. 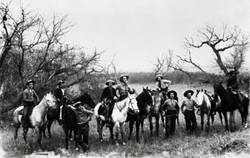 When a rumour circulated about a plot to smuggle a Gatling Gun across the border near Wakopa in the hope of delivering it to Riel’s forces, it was not only believed, but widely circulated.

Accepted wisdom today tells us that the native populations across the west almost unanimously refused to have anything to do with the Riel uprising, and populations in the U.S. had their own battles to worry about. Ken Coates in a scholarly look at the situation, insisted that:

“Ultimately, virtually all the rumours proved unfounded, the accusations incorrect, and the often precipitous actions unnecessary. The Aboriginal People of western Manitoba did not join the rebellion, nor is there any evidence to suggest that they seriously considered doing so. There were actually many more protestations of loyalty and offers to assist the government than there were threats to join the insurgents.” (Mb History Journal Autumn 1990)

Local histories remind us however that in the spring of 1885, folks weren’t so sure. Numerous reports indicate that local native populations were felt to be either an imminent or a potential threat. Words like: “restless”, “impudent” and “demanding” appear in many accounts.

All evidence indicates that when the settlers first arrived, relations with aboriginal people were amicable. Countless entries in local histories report as much. Was there a different attitude in 1885, or were settlers just reading things into innocent everyday events?

It didn’t help that local officials and media had raised the “threat level.” In Wakopa locals were sworn in as “Border Wardens” to prevent Indians from North Dakota from coming north to help in the rebellion. Home Guard Companies were formed across the province. Some old timers have reported that border-area homesteaders were given Enfield rifles with bayonets on them.

It is worth noting that the substantial North West Mounted Police presence in the region dates from the establishment of a post in Wakopa in 1884, well before the uprising. The reason for the establishment of that post, as reported in the Brandon sun on August 8 of that year, was to combat “horse and cattle” thieves. It also didn’t help that many settlers had recently arrived from Ontario and were well aware of sensational accounts of conflicts south of the border. As Coates suggests, the insurrection may have exposed a long-standing fear of Aboriginal People.

To Close for Comfort?

Another factor was our proximity to the United States; our direct connection to events there that were much more deadly than anything experienced here in Canada. The uprising of the Dakota in Minnesota led by Little Crow in 1862 had left hundreds of settlers dead and many communities ruined. At the time, groups of Dakota Santee, most likely innocent in the matter, had settled in the Turtle Mountain area, and many were still in the region. More recently the defeat of Custer at Little Big Horn had caught everyone’s attention and some refugees from that conflict had also found their way to Manitoba. Settlers were well aware of these events. So when Mrs. Herbert Cram was left alone with four children, we can understand why, years later, those children remembered how afraid she was that Indians would cross the border. They recalled how, after the children were in bed, she would take another look outside to see that there was nothing unusual or that there were no sounds of battle.

The “Rebellion” was over quickly, and although life in the new prairie settlements was able to return to normal, people felt vulnerable for a time.

A few years later Martha Belle Dunn, whose family homesteaded near Waskada in 1889, noticed that a Mountie rode by their place regularly all one summer. It must have made an impression on her because she remembered it long afterwards. She told her children that she learned many years later that the reasons for the patrols was that, “Sitting Bull and 3000 warriors were gathered 80 miles away and ready to invade Canada between the Turtle Mountain and the Souris River. “

We know now that such a thing was even possible.

What had been happening in and around Fort Yates, at the very southern edge of North Dakota, was that a religious practice known as the Ghost Dance was gaining popularity and authorities feared it would unite the aboriginal tribes and incite them to insurrection. It was also feared that Sitting Bull might leave his reservation with the Ghost Dancers. These fears culminated in the attempted arrest and killing of Sitting Bull on Dec. 15, 1890 and the massacre of 150 men women and children at Wounded Knee shortly after on December 29.

These events were the result of fears that informed people knew were unfounded even at the time.

Mrs. Dunn, isolated with her small children didn’t have the facts, but a bit of the fear seems to have spread across the border.

This report from the Daily Nor’Wester shows that by 1894, border security was becoming less of a priority.

This report from the Daily Nor’Wester shows that by 1894, border security was becoming less of a priority.

Before we judge the settlers, many of whom were indeed alone and unprotected, we should remember that during the First World War German and Slavic immigrants were seen as potential spies and saboteurs, and that during the Second World War, Japanese immigrants were the target of Euro- Settler’s fears. In each case, internment camps were just one of the more overt reactions.