(1738) La Verendrye was the first European to cross the plains and in 1738 he came across a collection of 101 Assiniboine tents along Cherry Creek.

At home in southwest Manitoba for centuries

The Assiniboine were once a Nation that occupied a territory that spanned the prairie provinces (including southwest Manitoba) and parts of the northern United States. Once numbering 10,000 strong, the Assiniboine spent at least two centuries hunting bison on the plains surrounding Turtle Mountain, and in later years actively participated in the fur trade on the Souris River. 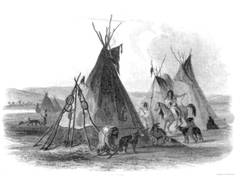 The Assiniboine were members of the Yanktonai arm of the Dakota Nation, who lived in the western forests of what is now Minnesota. The Assiniboine broke off from the Yanktonai sometime before 1640. Accounts of the events which caused the bitter split between them and the Dakota Nation were recorded in the journals of early explorers and fur traders. Legend has it that jealousy and passion over a women lay at the root of the division. A young warrior seduced and kidnapped the wife of an important man. This caused a conflict which escalated until one group, numbering about a thousand lodges, left for the north to the Lake of the Woods region where they sought out the Dakota’s traditional enemies, the Cree. They pledged that they would fight against the Dakota, in this way establishing an informal alliance.

Sources differ as to how the Assiniboine received their name. Some say it was the Cree who called this new Nation Assee-nee-pay-tock. Some say the word “Assiniboine” derives from the Ojibway word assini-pwa. Either way, the translation works out to be “Stoney Sioux.” This name describes the method which the Assiniboine used to cook their food: by dropping red-hot stones into a vessel of water. The name Assiniboine has therefore been attached to them by others. They call themselves the Nakota Oyadebi, which is also the name of their language.

From the Lake of the Woods region, the Assiniboine moved west sometime before 1680. It was here on the prairies that the Assiniboine discovered the animal upon which they subsisted thereafter: the bison. The bison was at this time the dominant animal of the plains, their numbers perhaps exceeding 70 million. The Assiniboine pursued them to satisfy their culinary and household needs: food, shelter, clothing, tools and fuel. They hunted on foot with bow and arrow, but also perfected alternate methods such as the bison pound. The Assiniboine wintered in places like Turtle Mountain where shelter and wildlife were plentiful.

Sieur de la Verendrye is the European given credit for being the first to cross the plains in front of Turtle Mountain. Passing through the region in 1738 he found a group of about 100 Assiniboine lodges camped beside Cherry Creek (near present-day Boissevain ). This group of Assiniboine travelled with la Verendrye to show him the way to the Mandan villages on the Missouri River. La Verendrye was the first European to trade directly with the Assiniboine and set up two trading posts – Fort la Rouge at the forks of the Red and Assiniboine Rivers, and Fort la Reine at present-day Portage La Prairie – in order to trade with them.

The Assiniboine were hospitable and accommodating towards Europeans. Contact with them brought new trade goods into their world, which reduced some of the laborious tasks brought on by their hunter-gatherer lifestyle. In turn, the Assiniboine were greatly valued by Europeans traders for their status as middlemen, excellent horsemen, and providers of food to trading posts. Their role as prominent partners in trade peaked between 1780 and 1800.

Rubbing shoulders with European traders, however, had a devastating effect on the Assiniboine. Along with trade goods the newcomers brought whiskey, evangelical religious practices and guns. It was this technology that depleted the once seemingly endless population of bison on the plains.

Europeans also passed along disease to the Assiniboine. One-half to two-thirds of the population was wiped out in the smallpox epidemic of 1780-81, before being cut in half again in the 1819-20 epidemic of measles and whooping cough. By the 1890s their numbers were a mere 2,600, due to successive outbreaks of disease. It wasn’t until the early 1900s that the Assiniboine got a chance to recover.

The 19th Century brought with it a much different world for the Assiniboine – their numbers destroyed by disease and the animal upon which every aspect of their life depended driven into virtual extinction. By the 1880s the Assiniboine were few in number and placed on reserves in Alberta, Saskatchewan and Montana (included in Treaties 4 and 6 which were signed in 1874 and 1876 respectively). Manitoba has no Assiniboine reserves, only individual members living off-reserve.